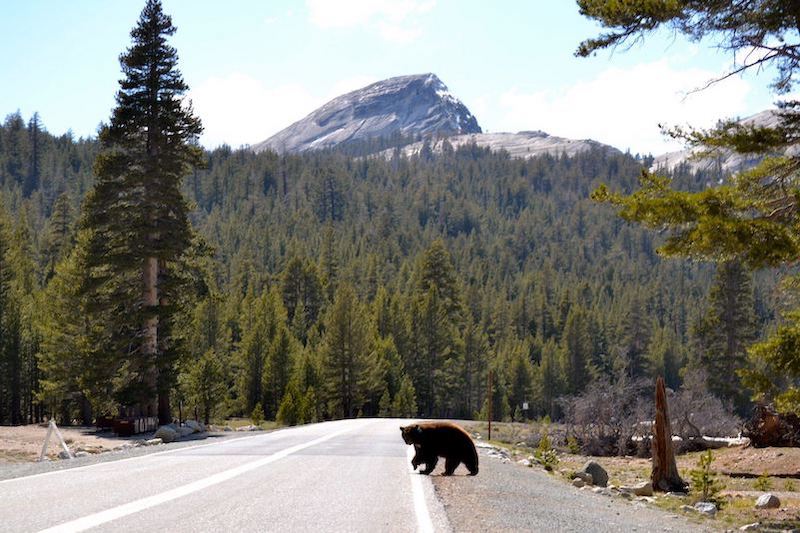 Have you ever noticed signs on the side of the road in Yosemite National Park that say, “speeding kills bears,” with the image of a red bear on them? These signs mark the locations of where bears have been hit by a vehicle this year, or where bears have been frequently hit in previous years. Park rangers take these signs down each winter and put them up as new accidents occur, hopefully as a reminder to visitors to slow down and keep a lookout for wildlife.

In the last three weeks, at least four bears were hit by cars in Yosemite, at least two of which were killed. The two bears that survived were hit by drivers going faster than the 25 mph speed limit and were seriously injured and limping. We will never know the severity of their injuries. It is important to remember that while traveling in the park, the posted speed limits are not only there to protect people, but to also protect wildlife in areas where animals cross roads.

Following posted speed limits may save the life of a great gray owl as it flies past your car, or a Pacific fisher as it runs across the road, both of which are endangered species. This easy action—slowing down—may also prevent you from hitting a bear eating berries on the side of the road, or a deer crossing with its fawn. While traveling through Yosemite, try to remember that we are all visitors in the home of countless animals, and it is up to you to follow the rules that are put in place to protect them.

If you do hit an animal while in Yosemite — regardless of species —  and need immediate ranger response, you can report it to the park’s emergency communication center at (209) 379-1992, or if you believe that the animal is uninjured, by leaving a message on the Save-A-Bear Hotline at (209) 372-0322. You may also use the Save-A-Bear Hotline number to report non-urgent bear observations.

For updating information regarding bears in Yosemite, check out Yosemite’s Bear-Team-Blog, or follow Yosemite National Park on Facebook. If you’d like to view the newly-released bear tracker, where park visitors are able to remotely  explore the lives of black bears, or for more information about how to keep bears (and yourself) safe inside the park, visit the Keep Bears Wild website.