Like you, I’ve seen this gentleman on the side of Highway 49 waving at the cars going by. It brightens my day every time I see him, and I was curious who he was and why it was important for him to spread his cheer. 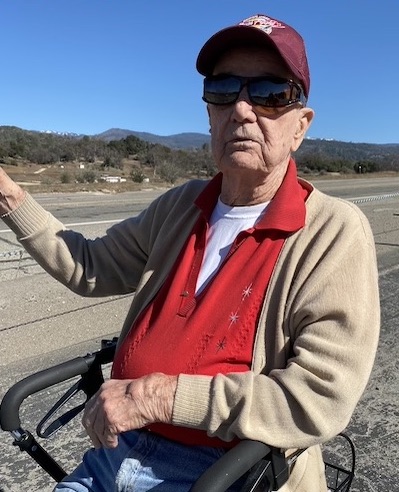 So today I took a little detour after shopping at True Value and here’s what I found out:

His name is Bill Howe and he’s 93 years old. “Almost 94!” he said, triumphantly. He is a WWII vet, who proudly served in the U.S. Navy in Hawaii.

You will see Bill regularly near the Masonic Hall waving at all the passing vehicles. One important thing he wants everyone to know is that he can’t see very well anymore, so he’d rather you acknowledge him with a BEEP rather than a wave. He also believes it’s safer if you beep, because your eyes will still be on the road.

He’s lived in the area for quite a while, first off of Deadwood, then North Fork, and now in Oak Terrace senior apartments.

He said that greeting passers-by makes him happy and it makes drivers happy and helps him get out of the house. Many might have recognized him from his WWII baseball cap, which he just recently lost at the Hitching Post. He said many friends followed up for him, but they said they never found it. If you’ve seen it or know who has, please return it to Bill or contact us and we will get it to him.