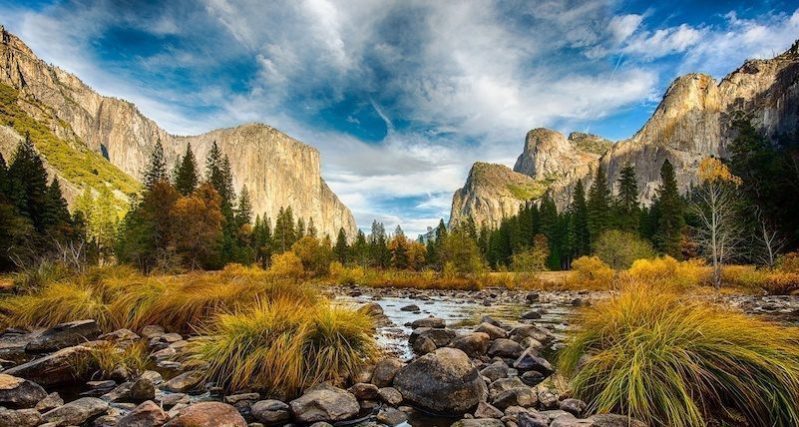 1. Yosemite might be our nation’s 3rd national park, but it sparked the idea of national parks. Twenty-six years before it was a national park, President Lincoln signed the Yosemite Land Grant on June 30, 1864, protecting the Mariposa Grove and Yosemite Valley. It was the first time the government protected land because of its natural beauty so that people could enjoy it, and we’re still benefiting from their foresight today. Thanks to John Muir’s passionate writing to further protect the delicate ecosystem of the High Sierra, Yosemite later became a national park.

2. Yosemite’s granite rock formations glow like fire at sunset. Sunlight plays amazing tricks at Yosemite — illuminating El Capitan and Half Dome in brilliant reds and oranges. Horsetail Fall is famous for appearing to be on fire when it reflects the orange glow of sunset in mid- to late-February. It’s a spectacular sight reminiscent of Yosemite’s historic Firefall, which occurred nightly until 1968, when hotel operators would push campfire embers over Glacier Point to wow park goers.

3. The park’s diverse landscape supports more than 400 species. While at Yosemite, look all around and you might spy one of the park’s many amphibians, reptiles, birds and mammals looking back. One such animal is the rare Sierra Nevada red fox, which was spotted for the first time in nearly 100 years on a wildlife cam, roaming the high elevations of California’s Sierra Nevada.

4. Yosemite is home to one of the tallest waterfalls in the world. At 2,425 feet, Yosemite Falls is one of tallest on the planet, but did you know, it’s actually made up of three separate falls? Upper Yosemite Fall, the middle cascades and Lower Yosemite Fall make up Yosemite Falls, which can be seen from numerous places around Yosemite Valley. Learn more about the other waterfalls at Yosemite.

5. Yosemite sees almost 3/4 of its visitors in six months. Millions of visitors from around the world come to witness the beauty of Yosemite firsthand, and we can definitely see why. Although the park is open all year, nearly 75 percent of visitors come to the park May through October, and most of them never leave the 6-square miles that is Yosemite Valley. If crowds aren’t your thing, consider visiting during winter or exploring some of the 1,100 square miles of the Yosemite Wilderness.

6. Yosemite is the only national park to bid to host the winter Olympics. In the early days of Yosemite, visitors flocked to the park as a summer resort but most stayed away during winter. That began to change in the 1920s as a new highway was completed and the park’s concessioner Don Tresidder sought to make Yosemite the “Switzerland of the West.” Toboggan runs, a large ice-skating rink and a small sky jump were built, while nearby meadows and roads became the canvas for dog sled rides, sledding and skijoring (skiing behind a horse with a tow rope). In the end, Lake Placid won the bid for the 1932 winter Olympics, but winter sports at Yosemite still live on today.

7. Yosemite is a climber’s playground. Since the 1880s, climbers have been drawn to the Yosemite and its soaring rock formations. That’s because it offers climbers an endless variety of challenges. Check out 25 pivotal moments in Yosemite climbing history — from John Muir’s summit of Cathedral Peak to Tommy Caldwell and Kevin Jorgeson becoming the first to free climb the Dawn Wall.

8. Yosemite is one of the few places in the U.S. where you can see a rainbow at night. Yosemite is world-famous for its waterfalls and the rainbows that can appear in them. But very few people know about the park’s lunar rainbows or moonbows. In the spring and early summer if the sky is clear and the moon is full, it can produce enough light to create a rainbow from a waterfall’s mist. It’s pure magic.

9. During certain times of year, some of Yosemite’s creeks are rushing slushies. This dramatic natural event — called frazil ice — occurs most commonly in the spring when there is high water flow over the falls and overnight temperatures are below freezing. The mist from the falls freezes, and it flows down the creek like a giant slurpee, surging into a snowy mass with icy water underneath.

Department of the Interior